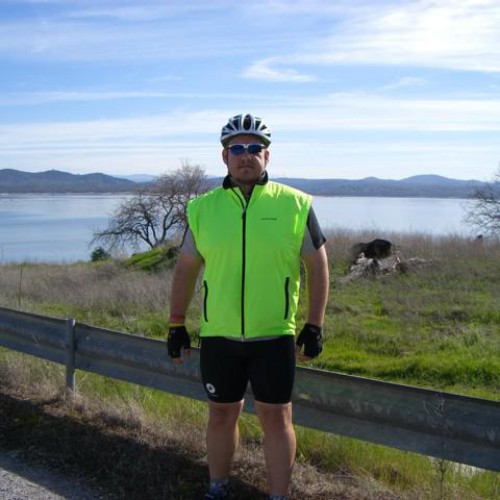 David Grundler, originally from Beale Air Force Base and an alumnus of UC Berkeley (Go Bears!), relocated his family to Davis in May 2002. In December of 2007, David moved to the Spring Lake community of Woodland; however, David's Woodland stint was short lived. He relocated his family to El Macero in July of 2010. David works for Park, Vaughan, Fleming & Dowler LLP (an intellectual property law firm) as the IT Director and a Patent Engineer, performing patent prosecution, as well as: IT, telephony, and other miscellaneous functions. He is a member of the Davis Bike Club, and previously served on the board of the Mad Cows Racing Team.

One of my favorite places by David Grundler CC-BY-4.0David is an avid supporter of March Madness and Bike Commute Month, and encourages others to pledge what they can.

David is very active in scouting. He serves as the Cubmaster for Pack 132, is on the committee of Venturing Crew 66, and is an Assistant Scoutmaster for Troop 466. Additionally, he is the District Vice-Chair for the Yolo District of the Golden Empire Council, The Yolo District Roundtable Commissioner, and the Yolo District Cub Camp Director. He is a Vigil Honors member of the Order of the Arrow, and is currently the Chapter Adviser. David attained the rank of Eagle Scout with Troop 68 of Lancaster, CA.

David enjoys exercising his Second Amendment rights, and is a National Rifle Association Instructor for the Rifle, Pistol, and Shotgun disciplines, as well as a certified Range Safety Officer. David is also a California Department of Justice Instructor, and can administer the exam for, and issue, California Firearm Safety Certificates. Most of his instruction is directed to youth in and out of scouting, and their family members; however, he is always willing to teach anyone with a good attitude and a willingness to learn.

Leave me some prose:

I removed what I did from the Linda Katehi page because it was cribbed from press releases and the like. 1) We shouldn't be using such fluff (though we certainly can use it to write our own stuff). 2) We probably can't distribute it under a Creative Commons license, either, as alluded to in my edit comment. If you think it's worthwhile that people read this stuff, just link to the originals.

And there is probably more, but I'm too lazy.

2016-04-14 13:06:50   About Katehi, I find it suspicious something is deleting info there now. She is very highly profiled in the news lately, with students protesting her staying on, and her overpaid position, her 'extra curricular' jobs. I can totally relate to these students, still being angry after "Pepperspray Pike", they never forgot that either. Somebody should mirror recent Katehi news in the Davis Wiki, maybe I will, as soon as I find the time. Or you? Thanks. —ConstantiaOomen