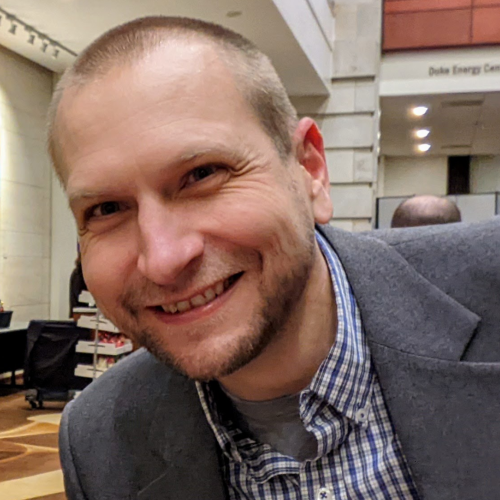 Hobbies: Linux, music, audio engineering, podcast junkie, watching the simpsons, too many others to list.

Current Quote/Thought What day is it?

Hand Perpetually in the cookie jar of projects: Writing Electronic Music of all kinds Python, C, and some others

In Progress list: Trying all sorts of new food

2008-09-01 13:08:26   Those actually weren't sarcastic. That's from Robin Williams who was raised and is Episcopalian (according to interviews, at any rate). I actually figured it was an urban legend (like many comedic "lists" attributed to various comedians and famous figures), but it appears to be an actual list he read on HBO and is reproduced on several Episcopal Church websites with nary a refutation on the various urban legend debunking sites. I have a feeling the person who added it was doing so out of a sense of pride in their church. —Evan 'JabberWokky' Edwards

2008-09-02 09:27:38   How is that text insulting? I'm absolutely serious. I don't see how ANYONE could be offended by it. I say this as a Southern Baptist, whose doctrine parts of that list poke fun at. —WilliamLewis

2008-09-13 18:48:26   Hey Scott, pardon for being presumptuous about what we want to portray on the wiki site. (You do know I am the same Carrie who is helping out with the site right?) Anyhow, at first I didn't know it was you, I was a little taken aback. But anyhow, it is what it is. I can see the argument that it being offensive to OTHER churches would make it undesirable for our purposes, since we don't want to offend other people... I'm not up for defending it really. Hope you aren't mad. Anyhow, cheerio! —CarrieBishop

2011-10-11 11:39:38   I don't go to St. Martin's (I'm not even in Davis) nor am I Episcopal. I am, however, quite familiar with Episcopal doctrine and liturgy. The general statements about Episcopal churches were accurate to the best of my knowledge. The information specific to St. Martin's seemed reasonable. You've removed a wealth of information by calling it "inaccurate and out of date" yet you have declined to specify what was wrong. I am going to restore information about the connection to the Belfry, policies on communion, the difference between the rites, and the notes on episcopal structure (especially with regards to the Church of England), which are all relevant and accurate to the best of my knowledge, unless you can name any specific objections to this material. It's all useful material that the wiki should have. —WilliamLewis

2011-10-11 12:27:21   I'm not picking on you or your church. I just want the wiki to be informative. When you delete information from the wiki, you make it less useful. There also seems to be a misunderstanding here when you refer to a page on this wiki as your church's website. The wiki is a community resource maintained by the community. It belongs to everyone. The church staff is one voice here, but certainly not the only one.

2011-10-11 13:29:04   Hey Scott, please take a few minutes and read Welcome to the Wiki/Business Owner. While you're obviously not the owner of the church, it explains some of the principles at play here. It'll probably help clear up some confusion. —TomGarberson

2011-10-11 17:00:40   People call Episcopal churches "Anglican." It's important to explain why. And the Baptists aren't in communion with Rome. ECUSA is in communion with the CoE. Different situations. And heck, going further, the liturgy used by the CoE and ECUSA is pretty much identical whereas the Baptists don't use any liturgy, but especially not anything from the Roman Catholic church which is not infrequently called "the whore of Babylon" in Baptist circles.

But let's ignore that for a bit. Why remove the stuff about the Belfry? Rite 1 and rite 2? Open communion? —WilliamLewis