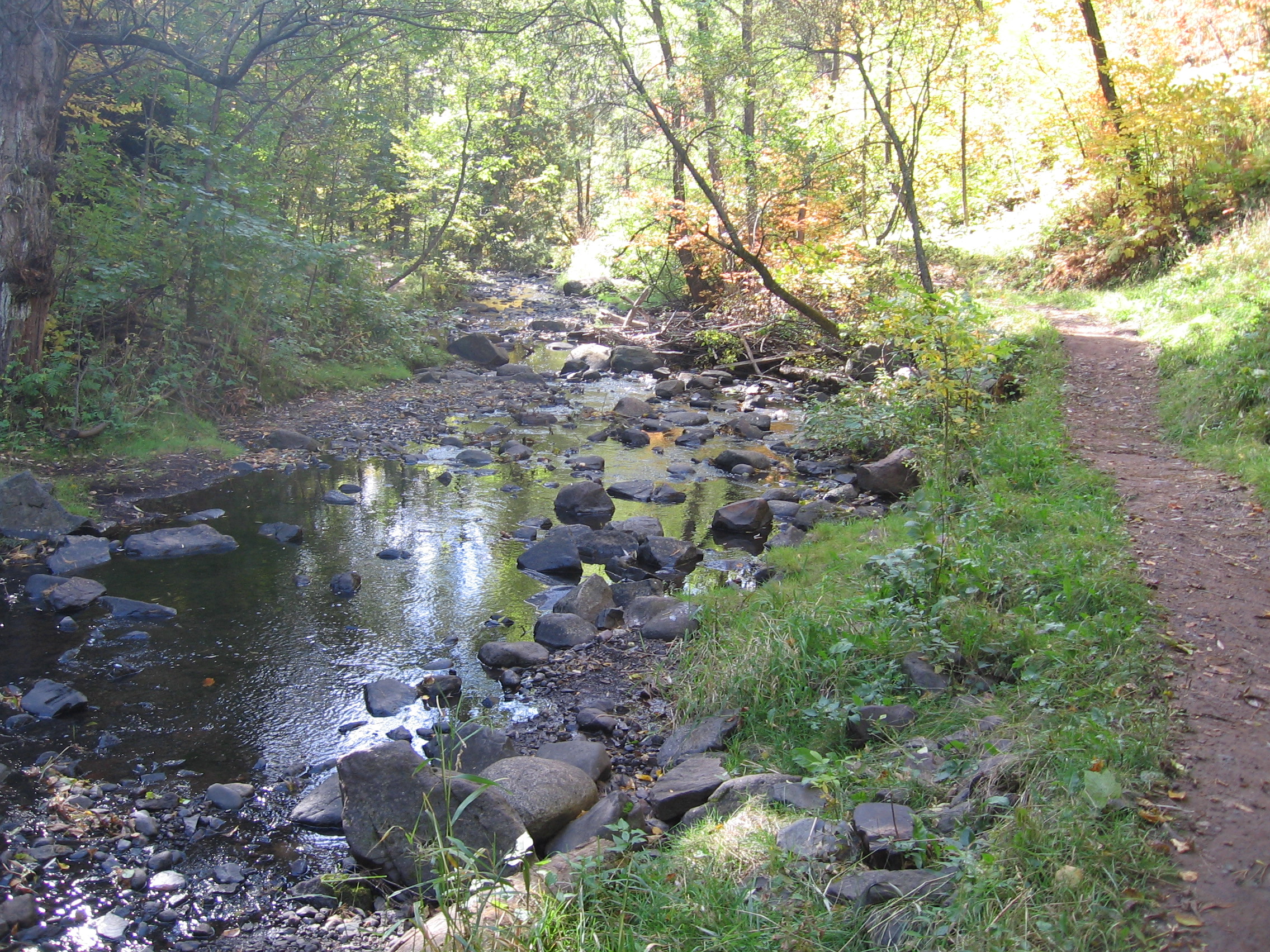 Chester Creek runs from it source at ??? to Lake Superior. It is publicly accessible from the top of the Chester Bowl in Chester Park down to 4th Street. Additional technical information about Chester Creek and its watershed can be found here.

There are some spectacular features to the creek, including a gorgeous waterfall just below Skyline Ave.

The trails on either side of the creek from Skyline to 4th Street are part of the Superior Hiking Trail system. This section is also officially known in Duluth as the Dan Proctor Trail. The trail is strictly for hiking; biking is not allowed. Runners are tolerated (see below).

The trails are generally well-maintained (mostly by the private efforts of Dan Proctor), but do present some difficulties. In Winter and early Spring, the trails can be very icy and slippery and ice cleats are a must. In late Spring, in Fall, or during any rainy period the trails can get quite muddy. There are also permanent dangers along the trail, in particular steep drop-offs that are neither protected nor marked. In the Summer of 2014, a hiker fell off a cliff near the 8th-9th Street bridge and was severely injured. Apparently in trying to make way for a jogger, the female hiker lost her footing and fell over the side of the cliff. She was rescued by the Duluth Fire Department. The extent of her injuries was not reported in the DNT's account of the incident. In 2010 another woman was found injured and unconscious in the creek gorge; the DNT report did not specify what happened to the woman. A number of other incidents are reported here. On Halloween day 2015, at around 1 pm, a male adult's body was found floating in the water near the Eighth/Ninth St. bridge. It appears the victim slid off a steep cliff on the SE side of the bridge. Trail conditions were quite soggy around this time. As reported in DNT on Nov. 2, 2015, the victim was 22-year-old University of Minnesota Duluth student Kyle Noble, 22, of Baudette, MN. Noble apparently left a relative’s house at about 2 a.m. on Oct. 31. It was reported that he had been drinking. The DNT quoted a St. Louis Co. Sheriff as saying, " We believe alcohol was a factor. He had frequently walked on those trails. But it was dark, it had been raining and it was very slippery." Noble was reported by the DNT to have fallen about 75 feet down the ravine at the SE corner of the 8th St. bridge. However, an eyewitness to the police response said the body was found floating in the pond just downstream of the pedestrian bridge at about 10th Street. This would indicate the victim fell from the steep drop off at the SW corner of the pedestrian bridge.

See this page for more on Chester Creek safety concerns.

On the night of June 23, 2013 two cars crashed into Chester Creek in apparently unrelated incidents. One went over the NW edge of the bridge at 9th St. as was reported in the press. Later that night a car traveling south on Chester Park Drive crashed into a fence and rolled over into the creek. Police arrived quickly but found that the driver had left the scene. Local rumors were that driver was later found inebriated, wandering around the area. The incident was not reported in the press.