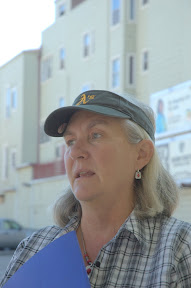 Annalee Allen is an Oakland historian, former Tribune columnist, and also runs the downtown walking tours program for the city. She is the author of several books on Oakland history, including Oakland (Postcard History), Selections from the Oakland Tribune Archives and Oakland Landmarks: An Artistic Portrayal of History which was co-created with artist Heidi Wyckoff.

They had this to say about her (from Deanna Santana's weekly newsletter, dated 5/10/13):

"Raised in Berkeley, Annalee graduated from UCLA with a degree in Art History before settling in Oakland with her husband Jim in 1978. She is the mother of three sons. Ms. Allen has been a consummate volunteer at more than 20 community organizations, serving in leadership positions at many of them. She was nominated for the Mother of the Year award by the Oakland Heritage Alliance. Annalee has been a dedicated Oakland booster, working to tell Oakland’s story in a positive and optimistic way, promoting the city’s virtues, heritage, quirks and culture. Since 1996, Annalee has coordinated the City of Oakland’s Oakland Tours Program, promoting the efforts of volunteer guides who lead walking tours of Oakland’s downtown. Annalee has published three books to educate the public on the city’s history: Selections from the Oakland Tribune Archives, Oakland Landmarks, and Oakland (Postcard History Series)."

Annalee Allen with her mother at Mother of the Year ceremony. Picture from Jean Quan's newsletter

When the Oakland Tribune ceased exist as anything more than a weekly masthead on the East Bay Times, Allen's column was discontinued.