Glenn Lawrence Burke (November 16, 1952 – May 30, 1995) was the first and only openly gay player in baseball, and suffered discrimination both for his homosexuality and his race. Glenn Burke was raised on 62nd Street near Bushrod Park.

It's not clear if he was out to the public and fans or just to his teammates. When he was with the LA Dodgers, he drew the wrath of manager Tommy Lasorda for befriending his estranged gay son, Tommy Lasorda, Jr. The Dodgers offered him $75,000 to get married (to a woman).

It wasn't much better in Oakland. Then-manager Billy Martin introduced Burke to the team as a "faggot."

Burke is also credited with having inventing the 'high five' with then teammate Dusty Baker. He was the only rookie to start in the 1977 World Series (which may help you at pub quiz one day).

After baseball, Burke came out to Sport magazine and on the Today Show with Bryant Gumbel and participated in the first Gay Games. There is a documentary about Burke: Out: The Glenn Burke Story.

Burke had a rough time after a shortened baseball career (1976-1979), but his former teammates and the Oakland A's came to his assistance when they found out he was suffering from AIDS, even after their cool welcome during his time with the team. Glenn Burke died in 1995 at Fairmont Hospital in San Leandro, and is buried in Mountain View Cemetery. His mother Alice died in 1999 and is buried nearby. 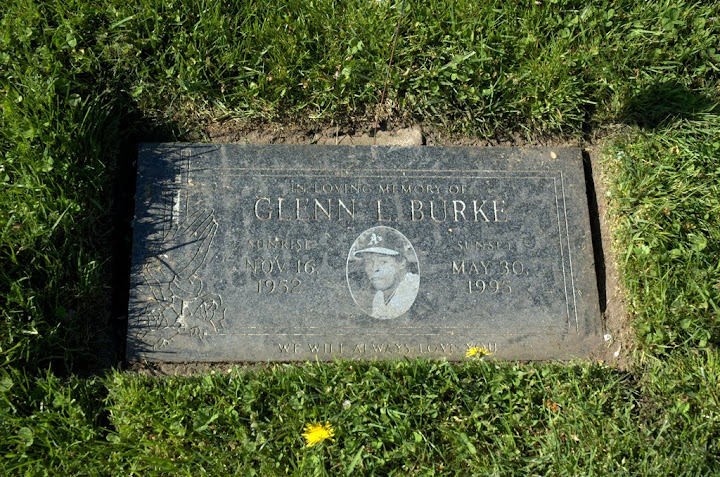 On April 29th, 2013, Jason Collins came out as the first gay player in the NBA. An article ran on MLB.com the same day saying that the 2013 A's would welcome an openly gay player on their team this time around.

Glenn Burke and his family were honored at the 2014 MLB All-Star Game.