There have been a number of protests in late 2013 and early 2014 in San Francisco & Oakland against Google busses. The busses are a symbolic target because they are emblemetic of a number of issues associated with gentrification, the influx of tech workers, and the shortage of affordable housing. Anti-gentrification protest posters [from We Built This City tumblr]. Images of wanted posters of former mayors Gavin Newsom and Edwin Lee, see also Wheatpasting."On Monday, organizers staged a protest at a Google bus stop in San Francisco with signs that read "Warning: Two-Tier System" and "Public $$$$, Private Gains." A video taken at the scene showed a confrontation between what seemed to be a protester and a Google employee who yelled, "Why don't you go to a city that can afford it? This is a city for the right people who can afford it."

Only, in a very San Francisco twist, the Google employee was a fake, played by union organizer and sometime Occupy protester Max Alper, who described the stunt later as "political theater to demonstrate what is happening to the city."" [source]

Jan 20, 2014: Google issues memo to employees urging them to go to a meeting of the SFMTA Board and tell them how much they love the shuttles - with canned talking points and all.

The flyer  that was supposedly distributed outside a Google employee's house in Berkeley, Jan 21, 2014. See indybay link for more.According to the website IndyBay, a protest also occurred in Berkeley outside the home of a Google developer, however no independent confirmation of this event has occurred yet.  The Berkeley Police Department says they received no calls regarding this. Protestors  supposedly notified him of the protest, and then held out a banner and began circulating fliers to his neighbors.  The fliers detailed some of his work history at Google as well as his plans to develop condos in Downtown Berkeley.  The Ashby BART google shuttle was also tempoarily blocked as part of this action.  [source] 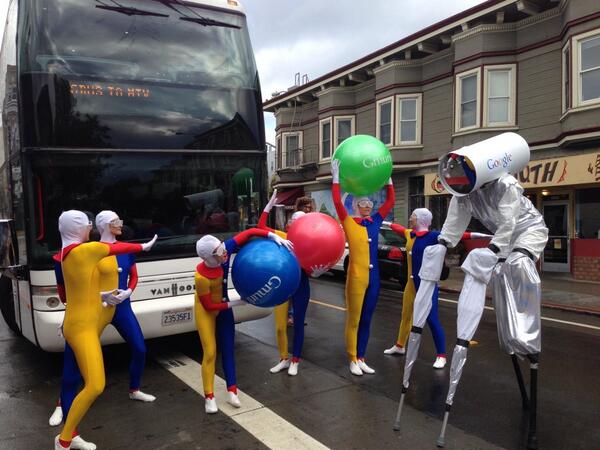 April 11, 2014: "The demonstration began at the corner of 18th and Dolores streets with the now-familiar San Francisco tableau of a blocked Google bus. Within minutes, police cleared the street and the protesters assembled outside a home on Guerrero Street between 20th and Liberty streets, where they allege a “Google lawyer” is attempting to evict tenants." [source] There are many pictures of the protest here.

July 24, 2014: One-woman protest of an Ebay bus. She stood in the road, blocked the bus from moving, and was yelling at the driver. [source]